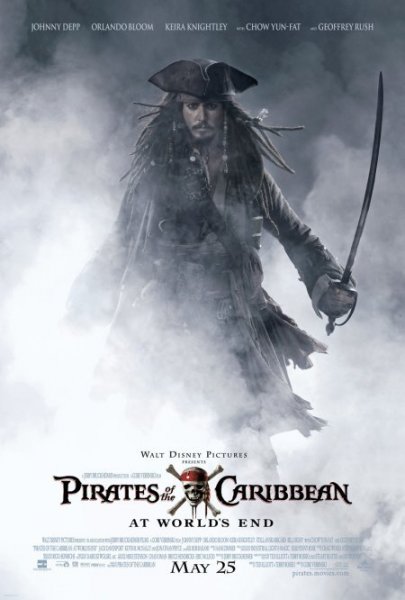 Share this quote on facebook Why should I sail with any of you? Four of you tried to kill me in the past. [points to Elizabeth] One of you succeeded.

Share this quote on facebook He needs the Pearl. "Captain Turner" needs the Pearl. [To Elizabeth] And you felt guilty. [To Barbossa] And you and your Brethren Court! Did no one come to save me just because they missed me? [Jack The Monkey, Ragetti and Pintel raise their hands] I'm staying over there with them!

Share this quote on facebook [After Barbossa asks for his plan]] Cuttlefish! Ay? Let us not, dear friends, forget our dear friends the cuttlefish... flippin' glorious little sausages. Pen them up together and they will devour each other without a second thought. Human nature, in'it? Ooor... fish nature. So yes! We could hold up here, well-provisioned and well-armed, and half of us would be dead within the month! Which seems grim to me any way you slice it! Or! ... ahh... as my learned colleague so naively suggests, we can release Calypso, and we can pray that she will be merciful-I rather doubt it. Can we, in fact, pretend that she is anything other than a woman scorned, like which fury Hell hath no? We cannot. Res ipsa loquitur, tabula in naufragio, we are left with but one option. I agree with, and I cannot believe the words are coming out of me mouth ... Captain Swann. We must fight!

Share this quote on facebook [to Elizabeth, holding his heart in the Dead Man's Chest] It's always belonged to you. Will you keep it safe?

Share this quote on facebook For certain, you have to be lost to find a place that can't be found, elseways everyone would know where it was.

Share this quote on facebook There's never a guarantee of coming back. But passing on, that's dead certain.

Share this quote on facebook You know the problem of being the last of anything, is by and by there’ll be none left at all.

Share this quote on facebook You will listen to me! LISTEN! The Brethren will still be looking here to us, to the Black Pearl to lead, and what will they see? Frightened bilgerats aboard a derelict ship? No, no they will see free men and freedom! And what the enemy will see is the flash of our cannons, they will hear the ring of our swords, and they will know what we can do! By the sweat of our brows and the strength of our backs and the courage of our hearts! Gentlemen... Hoist the colors!

Share this quote on facebook [last words, in a stunned torpor as his plans fall apart] It's just...good business.

Share this quote on facebook Ten years, I devoted to the duty you charged me. Ten years, I looked after those who died at sea, and finally, when we could be together again, you weren't there. Why weren't you there?

Share this quote on facebook Hector Barbossa: I see my ship. Right there! [pointing to the Black Pearl]
Jack Sparrow: Can't spot it. Must be a tiny little thing hiding behind the Pearl!

Share this quote on facebook Davy Jones: [Sees Dead Man's Chest being loaded onto the Flying Dutchman] Go! All of you! And take that infernal thing with you. I will not have it on my ship!
Lord Beckett: Oh, I'm sorry to hear that. Because I will. Because it seems to be the only way to ensure that this ship do as directed by the company. We need prisoners to interrogate, which tends to work best when they're alive.
Davy Jones: The Dutchman sails as it's captain commands …
Lord Beckett: … and it's captain is to sail it as commanded! I would have thought you'd had learned that when I ordered you to kill your pet. [Davy Jones bows head in shame] This is no longer your world, Jones. The immaterial has become … immaterial.

Share this quote on facebook Barbossa: Still thinking of running, Jack? Think you can outrun the world? ...You know, the problem with being the last of anything, by and by, there'll be none left at all.
Jack: Sometimes things come back, mate. We're living proof, you and me.
Barbossa: Aye, but that's a gamble of long odds, ain't it? There's never a guarantee of coming back. But passing on, that's dead certain.
Jack: Summoning the Brethren Court then, is it?
Barbossa: It's our only hope, lad.
Jack: That's a sad commentary in and of itself.
Barbossa: The world used to be a bigger place.
Jack Sparrow: The world's still the same. There's just... less in it.

Share this quote on facebook Gibbs: Look alive and keep a weather eye, men! It's not for naught it's called Shipwreck Island where lies Shipwreck Cove in the town of Shipwreck.
Jack Sparrow: You know, for all that pirates are clever clogs, we are an unimaginative lot when it comes to naming things.
Gibbs: [nods] Aye.
Jack Sparrow: I once sailed with a geezer lost both his arms and part of his eye.
Gibbs: What did you call him?
Jack Sparrow: [pauses] Larry.

Share this quote on facebook Pintel: Those aren't pieces of eight, they're just pieces of junk!
Gibbs: Aye, the original plan was to use nine pieces of eight to bind Calypso, but when the first court met the Brethren were, to a one, skint broke.
Pintel: So change the name!
Gibbs: To what? "Nine pieces of whatever we happened to have in our pockets at the time?" Oh yes, that's very piratey!

Share this quote on facebook Captain Chevalle: There has not been a king since the First Brethren Court, and that is not likely to change!
Captain Teague: Not likely.
Elizabeth: Why not?
Gibbs: Because the pirate king is elected by popular vote...
Barbossa:...and each pirate only votes for himself.
Jack: I call for a vote.
[Barbossa rolls his eyes as Captain Teague starts playing the guitar]
Captain Ammand: I vote for Ammand, the Corsair!
Captain Chevalle: Captain Chevalle, the penniless Frenchman!
Sri Sumbhajee's assistant: Sri Sumbhajee votes for Sri Sumbahjee!
Mistress Ching: Mistress Ching!
Captain Jocard: Gentleman Jocard!
Elizabeth: [shrugs] Elizabeth Swann!
Barbossa: Barbossa!
Captain Villanueva: Villanueva!
[Captain Teague stops playing his guitar]
Jack: Elizabeth Swann.
[Captain Teague continues to play the guitar while everyone stares at Jack Sparrow]
Elizabeth: [shocked] What?
Jack: I know. Curious, isn't it?
[The court begins to yell and argue disagreeing Jack's decision and a few tell him to change his vote for them]
Jack: Am I to understand that you lot will not be keeping to the code, then?
[Captain Teague's guitar string snaps as he looks up at the Court]

Share this quote on facebook Jack: What? You've seen it all, done it all. Survived. That's the trick isn't it? To survive?
Captain Teague: It's not just about living forever, Jackie. The trick is living with yourself forever.
Jack: [pause] How's mum? [Captain Teague holds up a decayed shrunken head] [revolted]... She looks great.

Share this quote on facebook Elizabeth: Prepare every vessel that floats. At dawn, we're at war.
Sri Sumbhajee: [high pitched voice] And so...we shall go to war! [Jack looks at him in surprise as the brethren cheers]

Share this quote on facebook Will Turner: [during the final battle] Will you marry me?
Elizabeth Swann: I don't think now's the best time!
Will Turner: Now may be the only time! I love you. I've made my choice. What's yours?
Elizabeth Swann: Barbossa!
[Will baffled because of her 'choice']
Elizabeth Swann: [to Barbossa] Marry us!
[Will looks at Barbossa relieved, narrowing his eyes because of the rain]
Barbossa:[while fending off multiple opponents] I'm a little busy at the moment!
Will Turner:[fighting opponents himself] Barbossa, NOW!
Barbossa:[after impaling three opponents] Fine then! [the three keep fighting whilst Barbossa stands up on the helm, kicking a solider in the face as he does so and Will and Elizabeth embrace] Dearly beloved, we be gathered here today... [distracted whilst fighting] to nail yer gizzards to the mast, yer poxy cur! [whilst Will and Elizabeth look up at him confused]

About Pirates of the Caribbean: At World's End

Share this quote on facebook The physics of a whirpool this size overwhelmed the team at ILM [Industrial Light and Magic, the effects company]. The path we were heading down was not achieving the desired results so it all had to be reworked. The initial rendered backgrounds were used as out of focus plates for close-ups which bought us time by getting 100 or so shots in the pipeline and allowed us to completely rethink and re-render the maelstrom for all of the wide shots. This is the exact opposite of how you would normally go about producing this sequence. John Knoll and the team at ILM ultimately pulled it off, but it was a real nail-biter.

Share this quote on facebook I have always been fascinated by the work of [Japanese animation director Hayao] Miyazaki. When we needed to get the Black Pearl back to the ocean, I thought, why are we limited to the rules of live-action filmmaking? Once those shackles are off, it is quite liberating. All sorts of ideas start to germinate. The crab is Tia Dalma's motif. Why not do something surreal and connected to her? Giving his escape a subtextual intention.