The Secret Of NIMH 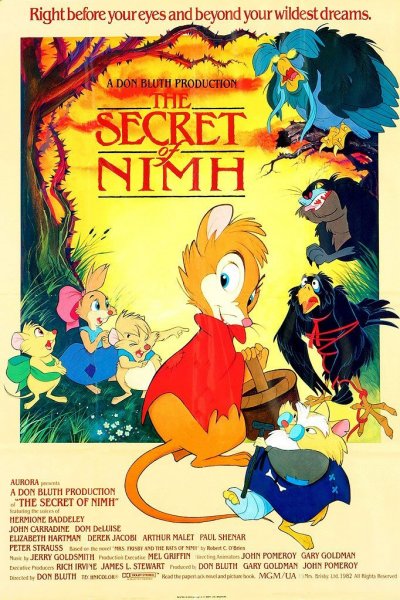 Share this quote on facebook [after lighting a candle] Jonathan Brisby was killed today while helping with the plan. It is four years since our departure from NIMH, and our world is changing. We cannot stay here much longer. [While writing words in a book] Jonathan was a dear friend. I am lost in knowing how to help his widow. She knows nothing of us or the plan. [Reloading ink for fountain pen] Perhaps best that I do nothing at present. [As he quickly writes signature] I shall miss him. [Holding and looking at amulet] Jonathan, wherever you are, your thoughts must comfort her tonight. She’ll be waiting, and you will not return. [as he puts away amulet in a case, closing it] Farewell, my friend.

Share this quote on facebook [when he gives Mrs. Brisby the amulet, and again later when she discovers its power] Courage of the heart is very rare. The stone has a power when it’s there.

Share this quote on facebook [when Nicodemus shows Mrs. Brisby a device in the corner. Two circles of metal set at right angles to form a rough globe, set in an ornate frame. The circles begin to spin, faster and faster. Energy plays across the surface of the globe described by its motion. Finally, the glowing green sphere we've already seen manifests itself. Nicodemus narrates the images] In the beginning, we were ordinary street rats, stealing our daily bread and living off the efforts of man's work. We were captured, put in cages, and sent to a place called NIMH. There were many animals there...in cages. They were put through the most unspeakable tortures to satisfy some scientific curiosity. Often at night I would hear them, crying out in anguish. Twenty rats and eleven mice were given injections...our world began changing. Then one night I looked upon the words under the cage door...and understood them. We had become intelligent. We could read. The miracle was kept secret from the scientists, and in the quiet of the night, we escaped through the ventilation system. The mice were blown away, sucked down dark air-shafts to their deaths. All except two...Jonathan and Mr. Ages. We were trapped by a locked door on the roof. It was Jonathan who made possible the unlocking of the door.

Share this quote on facebook Cast not pearls before swine, I always say, and that includes impudent piglets. Good day!

Share this quote on facebook [responding to Mrs. Brisby] I came here to inform you that the frost is off the ground, and moving day is at hand. Prepare to move your very, very odd family. Good day!

Share this quote on facebook Friends, tonight we journey to Thorn Valley. We will leave no tracks... no evidence that the rats of NIMH ever existed. Come...

Share this quote on facebook Jeremy: [after splashing in water] Excuse me. Pardon me. [coughs]
Mrs. Brisby: You keep making all that noise and Dragon will hear you, if he hasn't already.
Jeremy: Wouldn't you sing too, I mean... [flapping his wings and drying himself off] if you felt... [laughs] if you felt the call of the wild?
Mrs. Brisby: I would- [lowers her voice] I would not, if I knew there was a cat nearby. [snapping string with teeth and setting Jeremy's claw free]
Jeremy: But she's out there somewhere, and when I find her, I'll feel it, way down in my wishbone. I-- What cat?

Share this quote on facebook Teresa: [long after Auntie Shrew has gone] What are you doing here?
Jeremy: It's a good question, but don't ask. The legs. The legs! The legs! [collapses with a thud]
Cynthia: [mournfully, coming up to Jeremy's beak] Oh, the poor turkey fell down!

Share this quote on facebook [As Nicodemus and Mrs. Brisby leave]
Sullivan: I don't get it.
Jenner: [snickering] With Nicodemus out of the way, what's to stop us from taking over?
Sullivan: Jenner, you can't kill Nicodemus.
Jenner: No taste for blood, huh? [flicks Sullivan on the nose] They've taken the animal out of you.
Sullivan: What if we're discovered?
Jenner: Listen. The Brisby house is a large cement block. In the moving, what if it should fall?
Sullivan: An accident?
Jenner: Of course! Cut the lines, and the weight of it will crush his bones.
Sullivan: It's risky.
Jenner: Once rid of Nicodemus, the plan will die. We can stay here as long as we like.
Sullivan: What about Justin?
Jenner: Leave him to me... [echoing] to me... to me...

Share this quote on facebook Jenner: Hear me! The Thorn Valley plan is the aspiration of idiots and dreamers! We...! [Laughs] We were just talking about you.
Justin: That's refreshing, Jenner. Usually you're screaming about us.

Share this quote on facebook Justin: It was you! You did it! You killed Nicodemus. That was no accident!
Jenner: Yes! I killed him. He wanted to destroy everything! I've learned this much: take what you can...when you can!
Justin: Then you've learned nothing!

Share this quote on facebook Timmy: [from inside his room] Mommy, I'm tired of bed. I want to get up.
Mrs. Brisby: [responding from outside] Well, you're not getting up.

Share this quote on facebook [Mrs. Brisby is riding in a boat with Nicodemus and Justin when a rock falls, barely missing them]
Justin: That was close.
Mrs. Brisby: What's up there?
Justin: The mill. It's falling apart. I hope it stays up there...at least until we're done with The Plan.
Mrs. Brisby: "The Plan"? What is "The Plan"?
Nicodemus: Why, to live without stealing, of course.
Justin: It's wrong to take electricity from the farmer.
Nicodemus: [To Mrs. Brisby] My child, we can no longer live as rats. We know too much.

Share this quote on facebook [Mr. Ages is grabbed from behind by a disguised rat while guiding Mrs. Brisby through the rose bush]
Rat: Reveal thy name...
Mr. Ages: [Recognizes the rat's voice; annoyed] Justin! You featherhead! Get your hands off me!
Justin: Okay, okay! Just a joke! I didn't mean any harm. The meeting's already in progress.
Mr. Ages: What's this all about?
Justin: [Gestures at Mrs. Brisby] Who, may I ask?
Mr. Ages: Oh, yes. She can be trusted. This is no stranger. [To Mrs. Brisby] My dear, may I present Justin, the Captain of the Guard. Justin, this is Mrs. Brisby.
Justin: [Amazed] Not Mrs. Jonathan Brisby?
Mr. Ages: Yes, the same.
Justin: [Takes off his hat and bows] It is an honor and a privilege, m'lady.
Mr. Ages: If we could dispense with the formalities?

Share this quote on facebook Beth: He was asking if we had noticed anything strange about the rats on the farm. Well, I said "No, nothing unusual".
Farmer Fitzgibbon: Beth, I have to get up early.
Beth: Oh, it gave me goosebumps to hear him carry on that WAY! Like the rats might have some horrible disease!
Farmer Fitzgibbon: [to Beth] Good night, Beth!
Beth: I told him you'd call him back.
Farmer Fitzgibbon: [yawns] Uh-huh.
Beth: Yea. Right.

About The Secret of NIMH

Share this quote on facebook Jerry Goldsmith took The Secret of NIMH and showed it to Steven Spielberg. He took a look and said, "Wow, I thought this kind of animation was dead. I've been told forever that you can't do this anymore; it's too expensive." It wasn't the truth. You could do it, and we'd learned that you could¿ It was just the studio mentality that they simply didn't want to spend the money. Steven got very excited and he said, "Would you like to make a picture together?" We, of course, jumped at the opportunity.