Milchard was born in Barking, London on 13 December 1977, but spent the early years of her childhood living in Asia when her father's work as a scientist led the family to travelling the majority of the world, starting in Asia. She graduated from the Italia Conti Academy of Theatre Arts in 2000 which is Britain's oldest independent theatre arts training school, founded in 1911 by actress Italia Conti (Italia Emily Stella Conti, 1873–1946). 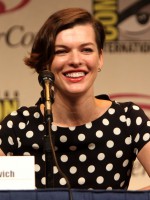