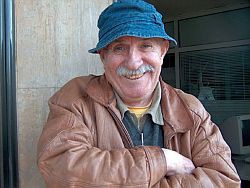 Nationality Bulgarie
Birth 27 june 1929 at Berkovitsa (Bulgarie)
Death 28 november 2007 (at 78 years) at Sofia (Bulgarie)
Donyo Donev (Bulgarian: Доньо Донев; 27 June 1929 – 28 November 2007) was a Bulgarian animator, director, art director and cartoonist. He is best known as the "father of The Three Fools" – an animated humorous sequence whose short episodes were continuously released during the 1970s and 1980s. His biting satirical caricatures were published in the most of the Bulgarian newspapers.

Donev's works are characterized with the simplified lines and at the same time plasticity of the motion and vivid expressiveness. He was the first who used deformed manner of speaking and interjections as a sound image of a second plan together with drum' and bagpipe' sounds.