Nationality USA
Birth 25 february 2000 (20 years) at Scottsdale (USA)
Laura Ann Kesling (born February 25, 2000) is an American child actress. She made her film debut as Bobbi in the Adam Sandler film Bedtime Stories. Kesling developed an interest in acting at a young age and has appeared in a number of commercials. Her mother is LPGA golfer Danielle Ammaccapane.

Kesling was a longtime resident of Phoenix, Arizona, but now lives in Manhattan Beach, California. Her father is Rod Kesling, and her mother is professional golfer Danielle Ammaccapane. She has a younger brother named Denver Christian Kesling who was born in 2004, and her aunt Dina Ammaccapane is also an LPGA golfer. As a child she spent her time in a traveling preschool, the LPGA Child Development Center. The center takes care of LPGA member's children while they play golf. Ammaccapane said in 2002 that "if it weren't for the center, I couldn't play professional golf and also have a child. I couldn't afford it. It would either be have a child and quit the tour or don't have a child. 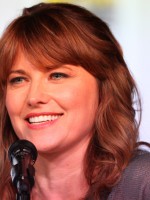 Skeeter Bronson (Adam Sandler) is a hotel handyman who was promised by his father, Marty Bronson (Jonathan Pryce), to be the manager of the family hotel. A mysophobe named Barry Nottingham (Richard Griffiths) agreed to keep that promise when the Bronson family sold their hotel to him—then built a new hotel instead. Thirty years later, when the story begins, Skeeter is the hotel's handyman while management is held by Kendall (Guy Pearce). Barry's new hotel, the Sunny Vista Nottingham Hotel, is a hit, but he's got plans to build an even more elaborate hotel, one designed around a theme that he's keeping secret.