Michèle Garcia participated to 28 films (as actor, director or script writer).
Among those, 1 have good markets following the box office. 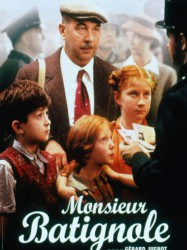 In 1942, in Paris, which is seized by Germany, a grocer Edmond Batignole (Gérard Jugnot) is living with his family in his grocery building. He has a daughter who is soon to be married. His future son-in-law, Pierre-Jean (Jean-Paul Rouve) and his wife wanted the apartment owned by a Jewish family. When the properties of all the Jews was confiscated the Batignole family got the apartment. The Jewish family was sent to transportation to Germany. After the Batignoles had occupied the apartment the Batignoles organise a party for the SS officials and during that party young Simon Bernstein (Jules Sitruk) of the Jewish family who had escaped from the Germans, returns to his home. Edmond Batignole feels sorry for the boy and hides him in the apartment from his family before anyone else could see him. Soon Simon's cousins meet him in the cellar of the grocery and the grocer plans to smuggle the children over the border to Switzerland.