Thurmeier was born and raised in Regina, Saskatchewan, Canada, and went to Archbishop M.C. O'Neill High School. Although he liked to draw, he wanted to become a lawyer, but he changed his mind when Aladdin came out in the last year of high school.

After he joined Blue Sky Studios, he served as an animator for Fight Club and The Sopranos. He later served as a supervising animator for Ice Age, Robots, and Ice Age: The Meltdown.

His first directing job was in 2006 when he co-directed a short animated film, No Time for Nuts, starring Scrat. Ice Age: Dawn of the Dinosaurs (2009) was his feature directing debut, followed in 2012 by Ice Age: Continental Drift. 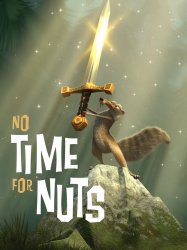 Scrat, the saber-toothed squirrel (a fictional animal from the Ice Age film series), while trying to find a place to hide his acorn, finds a buried time machine that states the date he's currently in (May 26, 20,000 BC) next to the ice-encased skeletal body of a human time traveler. He accidentally activates the machine, sending the acorn away. Scrat gets mad and tries to beat up the time machine and it sends him to the Middle Ages. Finding the acorn wedged under a rock, Scrat sees Excalibur and decides to use it as a lever to move the rock. He pulls out the sword but then finds himself under attack by a group of unseen archers, and uses the sword to block the arrows fired by the archers. He frees the acorn in the process and takes it and the time machine and races off to find cover, only to hide in the barrel of a cannon. The cannon fires him into the path of hundreds of incoming arrows. The time machine teleports the acorn mid-flight and Scrat just barely manages to activate the machine again for himself.

Ellie and Manny are expecting their first child, and Manny is obsessed with making life perfect and safe for the family, since his first experiences as a husband and father went bad when his family were killed by hunters. At the same time, Diego finds himself unable to catch a cocky gazelle he has been stalking and decides to leave the herd, believing that he is losing his predatory nature as a tiger. Sid grows jealous of Manny and Ellie and “adopts” three apparently abandoned eggs that he finds in an icy underground cavern and call them Egbert, Shelly, and Yoko. Manny tells him to put them back, but Sid instead looks after the eggs, which hatch into baby Tyrannosaurus the next morning.

A saber-toothed squirrel (known as Scrat) is trying to find a place to store his prized acorn. Eventually, as he tries to stomp it into the ground, he causes a large crack in the ground that extends for miles and miles and sets off a large avalanche. He barely escapes, but finds himself stepped on by a herd of prehistoric animals. The animals are trying to avoid the ice age by migrating south. Sid, a clumsy ground sloth left behind by his family, decides to move on by himself but is attacked by two Brontops whom he angered. Sid is soon saved by Manfred ("Manny"), an agitated mammoth who fights them off and is heading north. Not wanting to be alone and unprotected, Sid follows Manny. Meanwhile, Soto, the leader of a Smilodon pride, wants revenge on a group of humans by eating the chief's baby son, Roshan, alive. Soto leads a raid on the human camp, during which Roshan's mother is separated from the rest and jumps down a waterfall when cornered by Soto's lieutenant, Diego. For his failure, Diego is sent to find and retrieve the baby.