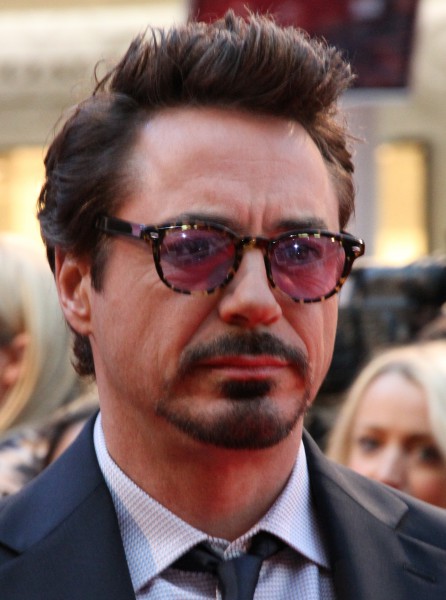 Birth name Robert John Downey Junior
Nationality USA
Birth 4 april 1965 (55 years) at New York City (USA)
Creator of Team Downey
Robert John Downey, Jr. (born April 4, 1965) is an American actor whose career has included critical and popular success in his youth, followed by a period of substance abuse and legal troubles, and a resurgence of commercial success in middle age.
Making his screen debut at the age of five, appearing in his father's film Pound (1970), he appeared in roles associated with the Brat Pack, such as the teen sci-fi comedy Weird Science (1985) and the drama Less Than Zero (1987). Other films he has starred in include the action comedy Air America (1990), the comedy Soapdish (1991), and the crime film Natural Born Killers (1994). He starred as Charlie Chaplin, the title character in the 1992 film Chaplin, which earned him a nomination for the Academy Award for Best Actor.

After being released in 2000 from the California Substance Abuse Treatment Facility and State Prison where he was on drug charges, Downey joined the cast of the TV series Ally McBeal playing Calista Flockhart's love interest. His performance was praised and he received a Golden Globe Award for Best Performance by an Actor in a Supporting Role in a Series, Miniseries, or Television Film. His character was written out when Downey was fired after two drug arrests in late 2000 and early 2001. After one last stay in a court-ordered drug treatment program, Downey finally achieved sobriety.

His more recent films include the musical comedy crime film The Singing Detective (2003), the supernatural horror film Gothika (2003), the crime comedy Kiss Kiss Bang Bang (2005), the animated science fiction thriller A Scanner Darkly (2006), the mystery thriller Zodiac (2007), and the satirical action comedy Tropic Thunder (2008), for which he was nominated for an Academy Award for Best Supporting Actor. Beginning in 2008, Downey has portrayed the role of Marvel Comics superhero Tony Stark/Iron Man in the Marvel Cinematic Universe, appearing in several films as either the lead role, member of an ensemble cast, or in a cameo. He played the title character in Guy Ritchie's Sherlock Holmes (2009) and its sequel (2011).

Downey has starred in several movies that have each grossed over $500 million at the box office worldwide. Three of those films, The Avengers, Avengers: Age of Ultron and Iron Man 3, each earned over $1 billion. For three consecutive years from 2012-2015, Downey has topped the Forbes list of Hollywood's highest-paid actors, making an estimated $80 million in earnings between June 2014 and June 2015.

Relationships and marriages
Downey started dating actress Sarah Jessica Parker after meeting her on the set of Firstborn. They separated in 1991 because of his drug addiction, according to Downey.

He married actress/singer Deborah Falconer on May 29, 1992, after a 42-day courtship, and had a son with her, Indio Falconer Downey, born on September 7, 1993 in Los Angeles County, California. The strain on their marriage from Downey's repeated trips to rehab and jail finally reached a breaking point; in 2001, in the midst of Downey's last arrest and sentencing to an extended stay in rehab, Falconer left Downey and took Indio with her. Downey and Falconer finalized their divorce on April 26, 2004.

In 2003, Downey met producer Susan Levin, an Executive Vice President of Production at Joel Silver's film company, Silver Pictures on the set of Gothika. Downey and Susan quietly struck up a romance during production, though Susan turned down his romantic advances twice. Despite Susan's worries that the romance would not last after the completion of shooting because "he's an actor; I have a real job", the couple's relationship continued after production wrapped on Gothika, and Downey proposed to Susan on the night before her thirtieth birthday. The couple were married on August 27, 2005, in a Jewish ceremony at Amagansett, New York. They have a son together named Exton Elias Downey, born on February 7, 2012 in Los Angeles. A tattoo on one of his biceps reads "Suzie Q" in tribute to her.

On July 9, 2014, he announced via Facebook and Twitter that he and his wife were expecting a daughter in November. On November 4, Susan gave birth to a girl named Avri Roel Downey.


Addiction and sobriety
Downey maintains that he has been drug-free since July 2003, thanks to his family, therapy, meditation, twelve-step recovery programs, yoga and the practice of Wing Chun kung fu. Downey has credited his wife with helping him kick his drug and alcohol habits. "There's no understanding for me of the bigger picture in real time in a hands-on way without her. Because it was the perfect, perfect, perfect matching of personalities and gifts." He has described his religious beliefs as "Jewish-Buddhist", studies astrology, and in the past has been interested in Christianity and the Hare Krishna ideology. In a panel discussion, Rachel McAdams, who co-starred with Downey in Sherlock Holmes, called him a "superhero" for his "committed" work ethic. On the same panel, Downey described how he worked long hours and many weekends to ensure the accuracy of his portrayal of Holmes so as to help make the film a success.

Downey has been a close friend of Mel Gibson since they starred in Air America. Downey defended Gibson during the controversy surrounding The Passion of the Christ, and said "nobody's perfect" in reference to Gibson's DUI. Said Gibson of Downey: "He was one of the first people to call and offer the hand of friendship. He just said, 'Hey, welcome to the club. Let's go see what we can do to work on ourselves.'"

In October 2011, Robert Downey Jr. was being honored at the 25th American Cinematheque Awards. Downey chose Gibson to present him with his award for his life's work. After Gibson's introduction, Downey did not discuss himself; instead he explained why he chose Gibson, and continued to utilize his air time by saying a few kind words about his friend. After relaying how Gibson helped him through his hardships, Downey addressed his fellow entertainers directly: "I humbly ask that you join me – unless you are completely without sin, and in which case you picked the wrong fucking industry – in forgiving my friend of his trespasses and offering him the same clean slate that you gave me and allowing him to continue his great and on-going contribution to our collective art without shame." After the speech, the two friends hugged onstage, to a standing ovation.

Downey has indicated that his time in prison changed his political point of view somewhat, saying, "I have a really interesting political point of view, and it's not always something I say too loud at dinner tables here, but you can't go from a $2,000-a-night suite at La Mirage to a penitentiary and really understand it and come out a liberal. You can't. I wouldn't wish that experience on anyone else, but it was very, very, very educational for me and has informed my proclivities and politics ever since." Downey is on the board of Anti-Recidivism Coalition.

On June 29, 2014, Downey's son Indio was arrested in West Hollywood, California, and taken into custody on felony cocaine possession charges after the car he was a passenger in was pulled over. When Downey bailed his son out, he stated that "Unfortunately there's a genetic component to addiction and Indio has likely inherited it. Also, there is a lot of family support and understanding, and we're all determined to rally behind him and help him become the man he's capable of being. We're grateful to the Sheriff's department for their intervention, and believe Indio can be another recovery success story instead of a cautionary tale."

In 1891, Irene Adler delivers a package to Herr Dr. Hoffmanstahl; payment for a letter he was to deliver. Hoffmanstahl opens the package, triggering a hidden bomb that is prevented from detonating by the intervention of Sherlock Holmes. Holmes takes the letter while Adler and Hoffmanstahl escape. Holmes finds Hoffmanstahl assassinated moments later. Adler meets with Professor Moriarty to explain the events, but Moriarty poisons and kills her — deeming her position compromised by her love for Holmes.
Results 1 to 15 of 87
123456Next page >