Nationality Japon
Birth 17 july 1957 (62 years) at Shinagawa-ku (Japon)
Shinobu Otake (大竹 しのぶ, Ōtake Shinobu, born 17 July 1957) is a Japanese actress. She has won three Japanese Academy Awards: the 2000 Best Actress award for Poppoya, and the 1979 awards for both Best Actress (Jiken) and Best Supporting Actress (Seishoku no ishibumi). She also won the award for best actress at the 12th Hochi Film Award for Eien no 1/2. At the 25th Moscow International Film Festival she won the award for Best Actress for her role in Owl. She has received a total of 12 nominations.

She was the favoured lead actress of director Kaneto Shindo after his previous lead actress, Nobuko Otowa, died in 1994, and featured in several of his films from A Last Note in 1995 to Postcard in 2011.

Otake has also acted on the stage.

Otake was born and grew up mostly in Tokyo. In 1982 she married Seiji Hattori, a Tokyo Broadcasting director who died in 1987. One year later, Otake married Akashiya Sanma, but got divorced in 1992. In the early 1990s Otake lived with playwright Hideki Noda.

Otake has two children, Nichika, a son by Hattori and Imaru, a daughter by Sanma. After her divorce she kept custody. 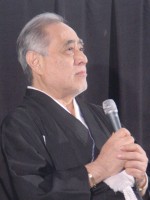 A single mother comes home to her single child and is accompanied by an unannounced, much younger man. Her daughter Tsukiko thinks in the first place her mother intends to pair her off with this stranger, but her mother wants the unemployed chef for herself. Tsukiko, who is unemployed herself, has it hard to somehow cope with this development.
Already seen ?
I love Near the end of the Second World War, Sadazo Morikawa (Naomasa Musaka) is one of a group of 100 overaged conscripts for the Japanese navy assigned to cleaning duty. Once the cleaning duty has finished, the members are chosen by lottery for various duties. Sadazo is assigned to serve in the Philippines. He thinks he will not survive, and asks a comrade, Matsuyama (Etsushi Toyokawa) to return a postcard to his wife, Tomoko (Shinobu Otake), and tell her that he received it before he died.
Already seen ?
I love Around 1980, two women, a mother and a daughter, the last occupants of a farming village called "Kibogaoka" for Japanese returnees from Manchuria, are slowly starving to death. As one of the women contemplates eating a lizard, the other suggests a better way to survive. They telephone a dam construction site and offer themselves as prostitutes. A worker comes to visit them, has sex with the mother, and then they give him their "special drink". This causes him to foam at the mouth, emit animal noises, and then die. They cart his body off and celebrate getting his money.
Already seen ?
I love Third-generation Korean, Sugihara, is a student at a Japanese high school after graduating from a North Korean junior high school in Japan. His father runs a back-alley shop that specializes in exchanging pachinko-earned goods for cash, which is stereotypically a “common” zainichi occupation. His father had long supported North Korea, but he obtained South Korean nationality to go sightseeing in Hawaii, which required a South Korean passport.
Already seen ?
I love A railway stationmaster at a dying end-of-the-line village in Hokkaido is haunted by memories of his dead wife and daughter. When the railroad line is scheduled to be closed, he is offered a job at a hotel, but he is emotionally unable to part with his career as a railroader. His life takes a turn when he meets a young woman with an interest in trains who resembles his daughter.
Already seen ?
I love

Yasukichi (Rentarō Mikuni) visits "Ubasuteyama", a mountain where, in the past, old people were left to die. He is a regular at a bar. While at the bar he defecates in his clothes. The bar owner (Naoko Otani) literally kicks him out of the bar. Lying on the pavement, he is run over by a man on a bicycle, who turns out to be a doctor. His daughter, Tokuko (Shinobu Otake), is awakened by a phone call from the hospital asking her to collect Yasukichi. She tries to decline, saying she has bipolar disorder and cannot look after her father, but eventually is forced to take him in. Yasukichi has stolen a book from the hospital about Obasuteyama and begins reading it to Tokuko. The story of Ubasuteyama is told on the screen, in a black and white film.
Already seen ?
I love