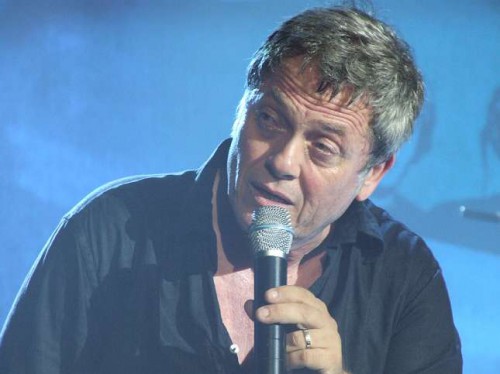 He was born on November 26, 1949, in Moshav Alonei Abba. In the course of his career, he has sold over 1.5 million albums, making him one of Israel's most successful male singers.

Artzi's parents were Holocaust survivors and their memories deeply influenced him and his sister Nava Semel, a playwright. His father, Yitzhak Artzi, in his youth Zionist activist in Bukovina, Romania, was later a member of the Knesset, his maternal grandmother, was the sister of Rabbi Meir Shapiro.

When Artzi was eight years old, his family moved to northern Tel Aviv. Artzi's schoolmates thought he would become an actor, not a musician, as he was known for his acting skills at elementary school. However, at the age of 12 he started playing the guitar and singing in a boy scouts group and at friends' parties. At age 16, he began writing and composing songs.

During his military service, he was recruited to the Artillery Corps, and after serving for a year and a half, he joined Lehakat Kheil Hayam (Naval Corps Entertainment Group). During his service in the group, he took part in the programs "And on the Third Day" and "Rhapsody in Blue", alongside other soon-to-be Israeli celebrities, such as Rivka Zohar, Dov Glikman, Avi Uriah, Riki Gal, and more. He was yet to stand out during the first program, but by the second program he became the lead singer and one of the main stars. He sang lead vocals on several songs on the Group's LPs.

In 1970, Artzi had the opportunity to take part in the Israeli Song Festival, a prestigious song contest held every year. Still in military service and wearing a military uniform, he sang Pitom Achshav, Pitom Hayom (Suddenly Now, Suddenly Today), also known as Ahavtiha (I loved her). The song, written by Tirza Atar and composed by Ya'akov Hollander, won first prize. It was included in his first album, Shlomo Artzi, which came out in 1970, and came in first in the annual chart-toppers countdown of Kol Israel. Artzi was voted Singer of the Year.Archived décembre 9, 2007 at the Wayback Machine

In 1977, after a string of failures, he decided to make one last record "the way a record should be made." The success of this album, "A Man Gets Lost" ( גבר הולך לאיבוד,Gever Holekh Le'ibud), persuaded Artzi to continue with his singing career, which rose throughout the 1980s and reached a peak with the release of the albums "Dance" (Tirkod) and "Restless Night" (לילה לא שקט,Layla Lo Shaket) which sold tens of thousands, and with the live shows that accompanied these albums, which would sell out the largest parks and theatres in Israel. His later album sales, in excess of a hundred-thousand per album, and the live shows that followed each album, made him the most popular artist in Israel; Based on album sales and gross income from live shows, he is the most successful singer in Israel. Artzi has sold a total of over a million and a half albums, an unprecedented achievement in the Israeli music industry. He is well known for his marathon live shows, some of which last over two or even three hours.