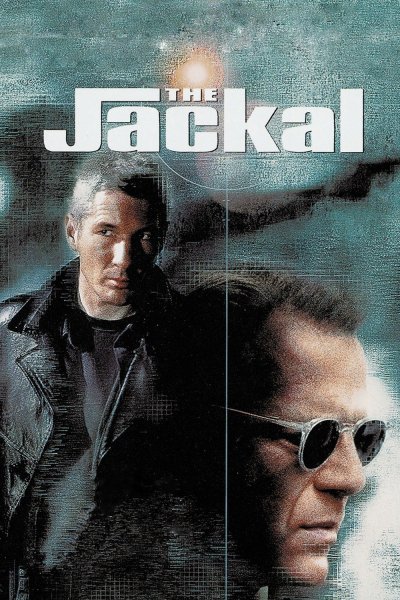 Share this quote on facebook [after splitting an associate's head with an axe] I loved this man like a brother. He was a dear friend and partner to me... so I took no joy in that. But just think, if I can do this to someone I love, imagine what I can do with someone I hate! So, the American FBI declares war on us? Then war it is.

Share this quote on facebook Terek Murad: I apologize for keeping you waiting. I had some other business to dispose of. [pours himself a drink] So much wasted time, confusing motion with accomplishment. Another drink?
The Jackal: [Russian] If we could get to the point.
[Terek sets the bottle down and switches off the TV, then pulls out a folder, before walking over to the Jackal.]
Terek Murad: The MVD killed my brother. For that, I will see they drown in blood. But to their allies in America, I wish to send a message - a very public message. I wish to strike fear into the marrow of their bones. [opens the folder and shows the Jackal a photograph] Can you kill this person?
The Jackal: Yes. [Terek runs the photograph through a shredder and sits down] If I take this job, I'll have to disappear. Forever. So if you want me to do this, you're going to have to pay me.
Terek Murad: How much?
The Jackal: American dollars, all cash, of course. Half now, half upon completion... [sips his drink] Seventy million.
Terek Murad: [laughs] Why not? [raises his drink] Done.
The Jackal: How many people know about this?
Terek Murad: You and I.
The Jackal: Keep it that way. Don't refer to our arrangement by telephone or fax, ever. You should find a place outside of Russia to hide until the mission's completed. If word of this leaks, it will be my choice whether to continue the mission or not. Either way, I keep the initial payment. Agreed?
Terek Murad: [nodding] Okay.

Share this quote on facebook T. I. Witherspoon: Look, we know that certain gang elements in this prison want you dead.
Declan Mulqueen: An entire government wants me dead, mister... yet here I am.
T.I. Witherspoon: Alright, smartass, let's cut the bullshit. You cooperate, and we'll get you transferred to a minimum security facility. That's our deal, and it's your only chance to ever walk out of this goddamn place in one piece. That's a one-time offer, now take it or leave it.
Declan Mulqueen: Stuff it, then. As many fuckin' times as you like. [to Koslova, cheerfully] Pardon the language. I've been in prison.

Share this quote on facebook Declan Mulqueen: A man like this doesn't make mistakes.
Valentina Koslova: No? They always make one somewhere. Isn't that how you were caught?
Carter Preston: Ouch.

Share this quote on facebook Carter Preston: Major Koslova ends the debate about women in combat as far as I'm concerned.
Declan Mulqueen: How's that?
Carter Preston: When she saved my life and took out Terek's brother, she did it knowing she'd be drawing a death sentence down on her neck. But when we offered to set her up some place else when this is over, you know what she said? "The good guys don't hide."
Declan Mulqueen: Fierce woman.
Carter Preston: In that country, under that system... staggering.

Share this quote on facebook Valentina Koslova: [about Isabella Zancona] She's Basque, isn't she?
Declan Mulqueen: Aye.
Valentina Koslova: They say Basques live by the vendetta. If they hate someone it's to the death. It's the same when they love.

Share this quote on facebook Director Donald Brown: We'll get this guy. We've got our best people on this, and they'll find him. [laughs] That's if he doesn't get his dick in a wringer like most of these clowns.
[Declan frowns and shakes his head]
Director Donald Brown: Is something the matter, Mr. Mulqueen?
Declan Mulqueen: Excuse me, sir. But this man is no clown. He knows all your moves, back to front. Right now, you've got a name; that's all you've got. So the Jackal's got a target: YOU. He's got a timetable. And as to making mistakes, he's spent twenty years in a trade that doesn't forgive error. And he's prevailed. You think he's the one who's up against us? [shakes his head] It's the other way around.

Share this quote on facebook Declan Mulqueen: Preston, what about letting me have a gun?
Carter Preston: Are you kidding? If the right people knew I was letting you walk around without cuffs, I'd get forced retirement!

Share this quote on facebook Ian Lamont: [seeing the new gun that The Jackal is about to test] Motherfucking motherfucker... that motherfucker is state of the art! Dude, I knew it was going to be big. I didn't know it was going to be the fuckin' prototype cannon. It's a fuckin' motrol... Damn! Some hairy looking rounds.
The Jackal: Made from depleted uranium. Go through anything. Once they get inside they just spall.
Ian Lamont: Hell yeah. They spall, yeah. They get in there and they just... [imitates spalling noise] That rocks. Look at the friggin' lens on that thing...
The Jackal: Don't touch that.
Ian Lamont: It's got like a 2000 mile zoom lens. That thing is kick ass. Dude, is this thing a prototype, or what? I bet you it cost you a shitload. That rocks. Man, you rock. Do you know what I'm saying? Rooooock! Fuckin' thing kicks ass. [the Jackal turns on the remote targeting computer, and brings up a visual of the target] Oh, yeah. Bring on the spall, baby. I can't wait to see the shit...
The Jackal: [annoyed] Lamont. Close your mouth.
[The Jackal locks in his pen/control stick, and tests the gun mount's movement]
Ian Lamont: Smooth action, yeah?
[The Jackal aims at the pumpkin target, and zooms in the lens, the crosshairs right on the face drawn onto the pumpkin... then he flips open the cover on the firing button]
The Jackal: Ready?
[Lamont nods and covers his ears, as the Jackal pushes the button, firing one shot, which crashes into the trees - but the pumpkin is unhit.]
Ian Lamont: YEAH! Spall! [the tree hit by the bullet topples, knocking the pumpkin off its stand] Well... it took out the target.
The Jackal: No, it's off... by at least three millimeters.
Ian Lamont: No, dude. That's precision craftsmanship. It ain't off no three millimeters.
The Jackal: So, Lamont... tell me how you sight in this thing automatically.
Ian Lamont: Uh, punch in the windage and the elevation you want and hit Enter.
The Jackal: So you just kinda guesstimate it, huh?
Ian Lamont: Basically guesstimation. [the Jackal inputs the settings, and the gun points right at Lamont] Whoa! Okay, I give up!
The Jackal: Well... I guess the automatic sighting works.
Ian Lamont: Yeah, I thought I was about to sprawl!
The Jackal: Well, Lamont, we're gonna have to speed-test it now.
Ian Lamont: Yep, speed-test.
The Jackal: So... run.
Ian Lamont: [confused] What do you mean?
The Jackal: I mean run. [icily] Now. [Lamont's expression suddenly becomes one of terror, as he runs across the muddy clearing] Run to your right!
[Lamont trips and falls in the water]
The Jackal: [to himself] Get up... [louder] Get up! [Lamont keeps running] Alright, good, stop there! Just stop there! Turn around! [Lamont turns] Hold out that pack of cigarettes! [seeing Lamont is petrified] Don't be afraid!
[Lamont fumbles in his shirt pocket and pulls out a pack of cigarettes]
The Jackal: Stay very still! [Lamont is shaking, part elements, part terror] Stand still!
[The Jackal looks over at Lamont, then back at his screen, aimed at the cigarette pack, as he fires another shot... which accidentally takes Lamont's right arm off in a bloody shred at the elbow. Lamont cries out in pain]
The Jackal: Told you it was off. [sees a moaning Lamont, without his left arm] Move over by the car! Quick, before you pass out! [Lamont does so, and as The Jackal prepares to fire, Lamont tries to shield himself by the car with his right arm, but it's too late. The car is hit a spray of bullets, as well as Lamont, and the car explodes]

Share this quote on facebook [The Jackal has just mortally wounded Valentina]
The Jackal: [points to her wound] Press here. Hard. It'll slow the bleeding.
[Valentina does so, and moans in pain, as the Jackal puts a pillow under her head]
The Jackal: Ah. See, that's bad. The blood's almost black. That means the bullet's in your liver. You've got about twenty minutes to live. [draws a heart shape on her cheek with her blood] If the pain gets to be too much, take your hand away, and you'll be dead in five minutes.
Valentina Koslova: [fiercely] When Declan kills you, you think of me, okay?
The Jackal: [smiles] Sure, I'll do that.
[He suddenly grabs her head and whispers cruelly in her ear]
The Jackal: If you see Declan before you die, tell him that he can't protect his women.

Share this quote on facebook [Springdale Memorial Cemetery - the Jackal is dead, buried in an unmarked grave, with Preston (wounded in the leg, carrying a cane) and Mulqueen (wounded in the shoulder, arm in a sling) as witnesses.]
Carter Preston: I wonder if we'll ever know who the hell he really was.
Declan Mulqueen: We know all we need to. He was evil, he's dead, and he's gone. Nothing more matters.