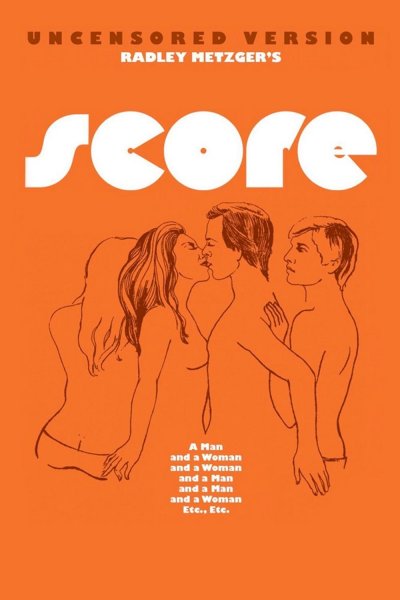 Score is a sexploitation film directed by Radley Metzger that was one of the first films to explore bisexual relationships. It was part of the brief porn chic fad in the early 1970s that also included Behind the Green Door, The Devil in Miss Jones and Deep Throat. The film was based on an off-Broadway stage play that ran for 23 performances at the Martinique Theatre from October 28 through November 15, 1971 and that featured Sylvester Stallone in a brief role (as telephone repairman Mike).
The theatrical version of Score was written by Jerry Douglas, who later became a mainstream screenwriter. It was set in a shabby Queens tenement, while the film was set in an elegant, mythical land and sported a relatively high budget for an independent film of that era.

It has been released in both soft-core and hard-core versions. One DVD release, a soft-core version, shows a renewed copyright date of 1976 (all prints featuring the 1976 copyright are the director's approved, edited version), but the film itself was actually released in the United States in December 1973. Hardcore prints, including full-frontal male nudity and fellatio, run 91 minutes, while the ubiquitous soft-core prints were released in an 84-minute format. First Run Pictures marketed the original hardcore version on videocassette, though it was a limited release available by special mail order only. These extremely rare prints occasionally surface on eBay. The hard-core version is now available on DVD and Blu-Ray.

In the mythical European city of Leisure, married couple Jack and Elvira have an ongoing bet regarding who can seduce whom. This comes up in the wake of a swinging night with a couple of tourists picked up via a newspaper ad. Elvira, a self-professed "sexual snob" has bet she can seduce newlywed Betsy, married to handsome marine biologist Eddie. If she fails by a certain midnight, then Jack gets to seduce Eddie. 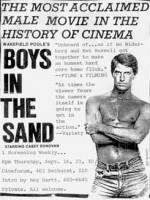 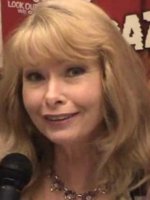 
Suggestions of similar film to Score 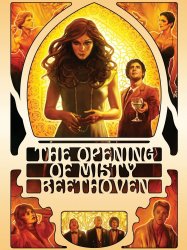 In a pornographic take-off of Shaw's play Pygmalion (and its derivative My Fair Lady), the film is about a sexologist who tries transforming a low-skilled prostitute into a goddess of passion. While he tries to prepare her to seduce a homosexual artist, it is he for whom she develops feelings. In this film, Henry Higgins (of Pygmalion) is replaced by Dr. Seymour Love, the sexologist, played by Jamie Gillis. Eliza Doolittle (of Pygmalion) becomes Dolores "Misty" Beethoven, who is played by Constance Money, and Colonel Pickering becomes Geraldine Rich, played by Jacqueline Beudant. During the film, Misty achieves "elevation" better than Love and Rich had hoped but then cuts them off, as in George Bernard Shaw's play. However, this film then sees Misty return, take over for Dr. Love, and run the "school". Dr. Love is present but in a very subservient position. It is clearly Misty that is in charge by this time.
Already seen ?
I love 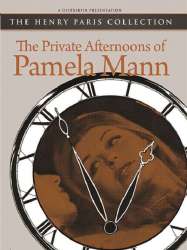 Bourbon plays Pamela Mann, a married psychotherapist living and working in Manhattan who has several sexual encounters that are filmed by a private detective hired by her husband. Mann has sex with one of her patients, a prostitute, and also is kidnapped by a couple of radicals. While the male radical orally rapes Mann, the female radical reads the text of a Supreme Court decision on pornography. She also fellates a man she meets on a park bench. At the climax at the film, Mann is revealed to be watching the detective's films in bed with her husband. They have staged the encounters and the snooping for their own private enjoyment. They then have sex.
Already seen ?
I love 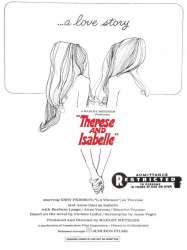 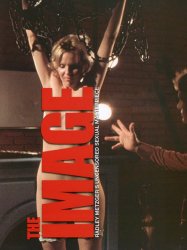 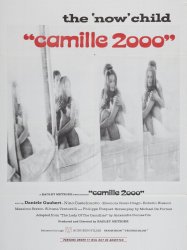 Marguerite, a beautiful woman of affairs, falls for the young and promising Armand, but sacrifices her love for him for the sake of his future and reputation.
Already seen ?
I love 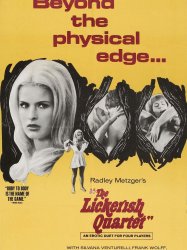 In their castle, a wealthy couple (Frank Wolff and Erika Remberg) watch a blue movie with their adult son, played by Paolo Turco. Later that evening at a local carnival, they spot a woman (Silvana Venturelli) who appears to be one of the performers in the film and decide to take her home with them. Although a subsequent viewing of the film calls the woman's identity into question, their house guest quickly succeeds in seducing the various members of the family, resulting in the revelation of certain facts, fears and desires.
Already seen ?
I love 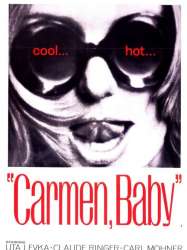 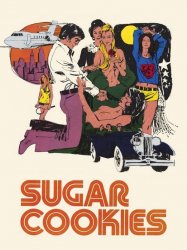 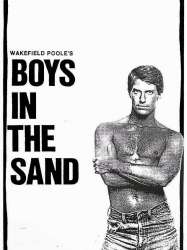 Bayside: The dark, bearded Peter Fisk walks along the wooded paths of the island until reaching a beach. He strips and sunbathes on a blanket. Suddenly, out in the water, the blond naked Donovan appears and runs up onto the beach to Fisk. Fisk performs oral sex on Donovan, who then leads Fisk into the woods. Fisk grabs the blanket and follows, catching up to Donovan in a clearing. They kiss and touch each other, then Donovan takes a studded leather strap from Fisk's wrist and attaches it around Fisk's genitalia. They continue the scene, with each performing oral sex on the other and Donovan penetrating Fisk. Following Donovan's climax he returns to servicing Fisk orally and, as Fisk is climaxing, momentary flashes of previous scenes are intercut. The scene ends with Fisk taking the strap from his genitals and attaching it around Donovan's wrist. Fisk runs into the ocean and vanishes, mirroring Donovan's entrance. Donovan dons Fisk's abandoned clothes and heads off down the beach. Poolside: The segment opens with Donovan on a pier, holding a newspaper. He returns to his house, strips by the pool and begins reading. Intrigued by an ad in the back of the paper, Donovan writes a letter in response. After a number of days pass (marked by the cliché device of fluttering calendar pages), he receives a reply in the form of a package. Inside is a tablet, which he throws into the pool. The water starts to churn and the dark-haired Danny Di Cioccio emerges to Donovan's delight. The two couple by the pool, with each performing oral sex on the other and Donovan penetrating Di Cioccio in a variety of positions. Di Cioccio turns the tables and tops Donovan until Donovan's climax. The scene closes with the two engaged in horseplay in the pool and then walking off together down a boardwalk.
Already seen ?
I love 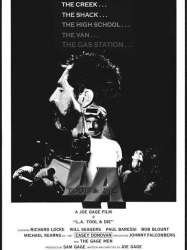