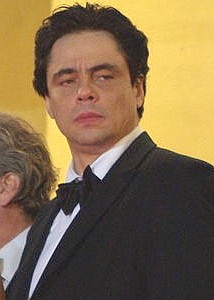 Birth name Benicio Monserrate Rafael del Toro Sánchez
Nationality USA
Birth 19 february 1967 (55 years) at San Juan (USA)
Awards Academy Award for Best Supporting Actor
Benicio Monserrate Rafael Del Toro Sánchez, better known as Benicio Del Toro (born February 19, 1967), is a Puerto Rican actor. He has won an Academy Award, a Golden Globe Award, a Screen Actors Guild Award and a BAFTA Award for his role as Javier Rodríguez in Traffic (2000). He is also known for his roles as Fred Fenster in The Usual Suspects (1995), Dr. Gonzo in Fear and Loathing in Las Vegas (1998), Franky Four Fingers in Snatch (2000), Jackie Boy in Sin City (2005) and Che Guevara in Che (2008), a performance which garnered him the Best Actor Award both at the Cannes Film Festival in France, and at the Goya Awards in Spain. He has also portrayed The Collector in the Marvel Studios film Guardians of the Galaxy. He is the third Puerto Rican to win an academy award.

While promoting his film The Wolfman in 2010, he described his romantic life as "in limbo." When asked if he had thoughts of settling down, he responded, "Why? Everyone says, 'Why isn’t he married?' But it’s like, 'Fuck! Why do I have to get married? Just so I can get divorced?'" In an interview with The Times he mentioned that he did not want his West Hollywood apartment, which he described as his "cave," to be "invaded" by a wife and children.

On April 11, 2011, Del Toro's publicist announced that Del Toro and Kimberly Stewart (daughter of Rod Stewart) were expecting their first child, although they were not in a relationship. Stewart gave birth to a daughter, Delilah, on August 21, 2011. They had their daughter baptized in Puerto Rico.

On November 4, 2011, he acquired Spanish citizenship, along with fellow Puerto Rican Ricky Martin. The request was granted by the Spanish government due to his artistic talents and his Spanish roots (he has family in Barcelona).

In March 2012, he was granted an honorary degree by the Inter-American University of Puerto Rico for his impact on the cinema enterprise, during the celebration of the institution centenary. 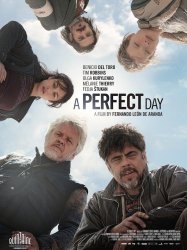 Opening in the summer of 1991, young Canadian surfer Nick is called into a cartel's hideout and tasked with committing a murder on the drug lord's behalf. Speeding off on his mission along the dark road and hardly able to keep his breath, Nick is stuck in a conundrum that only becomes clear as it flashes back to a few years earlier. Arriving on the Colombian coast to run a surf camp with his eager brother (Corbet), Nick meets the beautiful Maria (Traisac), and quickly falls for her. The sunny beaches provide a notable visual contrast to the murkier scenes that follow, as Nick gradually realizes the extent of Escobar's power. At social gatherings, Escobar's domineering personality leaves Nick in a confused state about his priorities.
Results 1 to 15 of 62
12345Next page >